Most songs were initially sung by the Vocaloid IA, while a few were sung by the Vocaloid Hatsune Miku, however, the third and most recent album, Mekakucity Reload, only features Miku. The project started on February 17, 2011 when the first song, Jinzou Enemy, was uploaded to Niconico, and in a 2016 interview with T., Jin stated that "Kagerou Project Will Never End".[5] The story features several different routes which are told through media such as the aforementioned songs, a light novel and manga series both titled Kagerou Daze (カゲロウデイズ Kagerō Deizu), and several anime.

A spin-off to the main Kagerou Project story set 3 years later titled Kagerou Daze No.9, with art done by Sayuki, was announced on June 8, 2019 and was originally set to screen January 2020, but has since been delayed.

There have been a total of 1 self-published album (Mekakucity Actors) 3 studio albums (Mekakucity Days, Mekakucity Records, and Mekakucity Reload), 4 singles (Children Record, daze / days, RED, and Children Record (Re:boot)),  and 2 OSTs (Mekakucity M's, Music Collection). Music videos for select songs were done primarily by Sidu and Wannyanpoo, with the exceptions being Summertime Record, which was animated by the artist Peco and directed by Sidu, and Children Record (Re:boot), which was illustrated by Sayuki and directed by INPINE. A portion of the songs make up the Music Route of the story, and is followed by the Manga, Novel, and Mekakucity Actors Routes.

The Manga Route of Kagerou Daze (カゲロウデイズ Kagerō Deizu) was published monthly in the Japanese magazine Comic Gene from June 15, 2012 to February 15, 2019. The story is illustrated by Mahiro Satou and featured thirteen volumes. It is a sequel to the Music Route[6] and is followed by the Novel Route[7]. The manga is licensed by Yen Press in English and was released from April 21, 2015 to November 26, 2019.[8]

The eight-volume Kagerou Daze (カゲロウデイズ Kagerō Deizu) light novel series was published from March 30, 2012 to December 29, 2017. It is a sequel to the Manga Route and is followed by Mekakucity Actors. The novel is licensed by Yen Press under their Yen On imprint and was released from May 26, 2015 to December 18, 2018.

Mekakucity Actors (メカクシティアクターズ Mekakushiti Akutāzu) had first been announced in the Children Record booklet. After receiving its title, the anime was announced to air on April 12, 2013 at midnight. During the "Live in Mekakucity" performance on August 15, it was announced the anime would be animated by Shaft and directed by Akiyuki Shinbo and Yuki Yase[9]. The series consists of 12 episodes and is written by Jin. It is a sequel to the Music, Manga, and Novel Routes.

Kagerou Daze -in a day's- (カゲロウデイズ-in a day's- Kagerō Deizu -in a day's-) is a short anime film written and directed by Sidu that was released November 4, 2016. It was produced with MX4D presentation in mind. 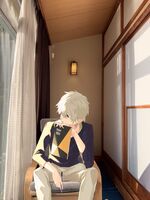