Start a Wiki
This article is about the short anime film. For other uses, see Kagerou Daze (disambiguation).

Kagerou Daze -in a day's- (カゲロウデイズ-in a day's- Kagerō Deizu -in a day's-) is a short anime film directed by Sidu. It was produced with MX4D presentation in mind and was animated by JUMONJI. It was released November 4, 2016. [1]

The theme song is RED by GOUACHE. The film was released on Blu-ray and DVD with additional scenes on March 14, 2018.

The timeline placement of this route is unclear, but is likely after the second manga route due to Shintaro's eye ability. Sidu said this route has a sequel called "route-2"[2], but didn't go into detail.

A small group of three hooded people, notably one with red eyes, stands together on top of a building, listening to a broadcast over an iPod. One of them speaks an order into their phone. Thereupon, the group breaks into a mall, carrying weapons and using violence against the respective staff. They make their way into the security department and turn off the alarm systems. A accomplice outside the building receives a phone call from them, then makes their way inside. While one starts shooting into the air with a gun to make their presence known, the outsider punches down a random customer, causing a panic

A group of hostages, including Shintaro Kisaragi, Kousuke Seto and Marry Kozakura, sit together in a dimly lit electronics store. Shintaro begins to wonder how he ended up in this kind of situation.

A flashback to earlier shows Shintaro having a conversation with Ene, his cyber assistant, in the electronic section of the mall. As he makes a gesture with his arm, he accidentally hits the head of a person and frantically apologizes. Hibiya Amamiya, who observers him, questions why Shintaro is apologizing to an empty spot in the air. The company of Hibiya, Hiyori Asahina, tells him to hurry up, though says she can take Konoha, who came along, on a date since he's spacing out. Suddenly, Hiyori looks through her purse, discovering that an item she bought is missing, and hurries to get it. The other two follow her.

Momo Kisaragi, Tsubomi Kido and Marry are seen together in front of a store, Momo and Marry panting out of breath, as they had to hurry to get away from Shintaro, who had previously hit Momo's head and was threatening to make Kido's Eye Ability, which cloaked their presence, stop working by bumping into them. Marry complains to Kido that she does not need to be protected, as she is not a child anymore. Momo tries to lighten up the mood by saying Marry is the mascot of the Mekakushi Dan, to which Kido nervously agrees. Marry glares at them grumpily. As the three of them start walking again, Momo notices that her brother, Shintaro, is directly behind them, although unable to detect them.

Just as Seto and Shuuya Kano happen to run into them from the top of an escalator, something explodes and turns off the lights in the mall. When Marry sees armed men come towards them, tears well up in her eyes, and Seto jumps to protect her as the men jump on top of the two and Shintaro. Shintaro notices one of the the men as red eyes.

The flashback ends. The three talk together, trying to find a solution for the current situation. Marry, feeling the need to protect her friends, charges forward to stun the enemies with her inherited gorgon gaze. However, Shintaro, unaware of her powers, steps in front of her to talk her out of confronting the armed men, resulting in him being stunned and one of the men remaining conscious. Just in time, Momo and Kano attack the man with brooms. Seto orders Kido to cloak the presence of the group, unfortunately excluding himself, as he is too far away from her. To help Seto, Kano uses his Eye Ability to deceive the terrorists into thinking that they there were other people threatening their raid and whom they should take care of immediately.

Shintaro, still stunned, watches Momo try to make him react, without success, then return to the others to discuss a plan. Kido asks Seto if he is alright, which he shyly confirms. Kano holds up a document[?] and states that it is their needed solution, leaving Kido to wonder when he got his hands on that. She further speaks about how Momo once mentioned that her brother is in possession of a hacking device, Ene, which they need to proceed. Yet, when Momo searches Shintaro's clothes for his phone, it appears missing.

Hibiya, who is outside the store, in the hall of the mall, holds Shintaro's phone and discovers Ene on it, thinking it is some fort of cool, but weird application.

The gang makes a plan to overpower the enemies. They discuss to make Momo draw their gazes so that they would become helpless. But before then, Momo and Marry would have to open the gates by force, driving a shopping cart into it. Kano, on the other hand, is told to prepare a bucket trap for the enemy, in which he would need to put on a bullet proof vest and take on the disguise of Kido.

Konoha finds himself standing in front of a locked gate. Hibiya discovers him and asks what he is doing, and where he left Hiyori. Konoha replies that he does not know. At the same time, Ene takes a peek at Konoha, visibly taken off guard at the sight of him. While Hibiya decides to go look for Hiyori at the bathrooms, he leaves the phone in Konoha's care. Ene continues to nervously stare at Konoha, who then runs against the gate, as he seems to have forgotten that the pathway remains closed.

The moment Momo and Marry attempt to carry out their plan of crashing into the gate with a shopping cart to get it open, it is lifted open by Konoha, much to Momo's perplexity. Startled, the two of them fall out of the cart and have to hide from some terrorists who overheard the noise it caused. Marry turns herself in to them to protect Momo. Seto, who witnessed the scene, asks Momo whether she is alright, who responds with worry about Marry, but the other reassures her that their friend will be fine. Seto advises Momo to go ahead and leave the store, whereupon he happens to trip upon Hibiya on the ground.

In the meantime, Kido carries Shintaro outside, who finally recovers from the stun. Shintaro confirms that Ene is able to hack into the security system, yet mentions that it could get dangerous. As he walks away, Kido mumbles to herself that fun is to be expected.

Konoha aimlessly wanders through the halls, loudly talking to himself, which Ene tries to cut off so that they would not get discovered by the terrorists, as suddenly they see Shintaro being choked by one of them on the other side of the hall. Without hesitation, Konoha leaps over onto the railing, inquiring whether the enemy has seen Hiyori somewhere. Confused, the man drops his victim, whom Konoha catches just in time. Noticing Ene in the hold of Konoha, Shintaro guesses that Hiyori might be with the other hostages.

Lying in wait, Seto strikes down one of the terrorists with a pole. Hibiya, holding a baking machine in his arms, spots Hiyori among the hostages. When the latter stands up to yell at the felons, the two take the moment to attack the group with their held items. Seto continues to fight off the enemies, while Hibiya hurries to free the hostages from their ties. Although the terrorists threaten to shoot Seto, their attention is relocated.

Momo, who is outside the scene, psyches herself up to use her Eye Ability, but is interrupted by Shintaro and Konoha. The three of them are watched by the leader of the terrorist group, who calls his accomplices to check the situation.

The shooters previously targeting Seto are distracted by a cart that is pushed by the escaped hostages and hid underneath a cover. Hibiya personally attacks one of them, then hastily tries to run away from another one. Kano, disguised as Kido, jumps in front of Hibiya and is shot into the chest, safe due to the west he put on previously. Just then, he cuts the string that held up the bucket, in order to make it fall on the remaining man.

Kano and Seto watch on, as Konoha launches Shintaro into the air and throws him over a railing to get the the leader of the group. He confronts the leader in the security section and realizes he isn't the person with the eye ability, and he is attacked from the back by Kido. Ene is connected to the system, broadcasting Momo onto a huge screen inside the mall main hall. With their gazes attracted to Momo, the terrorists end up overpowered and the mall is secured. The group realized that the leader did not have an eye ability, but Shintaro recalls seeing a different terrorist with an eye ability.

A bomb beneath the mall counts to zero as the group leaves. 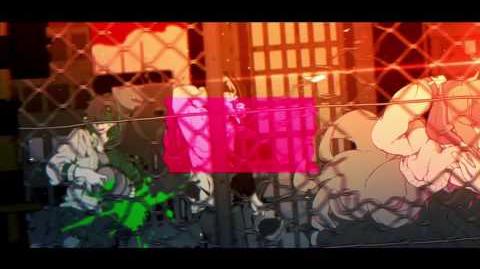 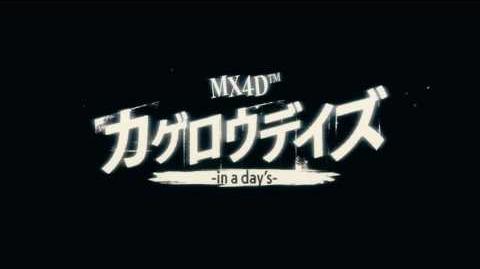 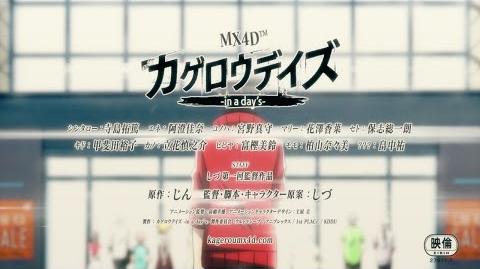 Terrorist with Eye Power that Shintaro saw.
Add a photo to this gallery

Retrieved from "https://kagerouproject.fandom.com/wiki/Kagerou_Daze_-in_a_day%27s-?oldid=36888"
Community content is available under CC-BY-SA unless otherwise noted.